LN Bey was a reader of erotica long before taking up the pen, with particular attraction

As LN explains, “In Story of O, in the Beauty trilogy, and in The Marketplace, the subs are there to serve and to lose themselves, not to be coddled before and after a spanking. It’s assumed that Masters are entitled to their slaves’ submission, and that’s what the submissives expect, and want, as well.” 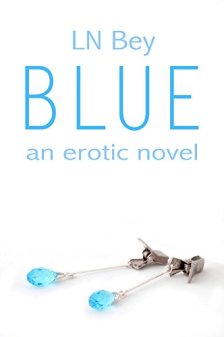 Unlike Story of O and the worlds of Antoniou, Weatherfield and Roquelaure, there are no castles or billionaire mansions in Blue, which is set in the blandest of American suburbs, where our cast of kinky suburbanites, each flawed and ego-centric, have day jobs, shop in supermarkets and battle traffic jams.

As LN explains, “I’m not a fan of overly romantic language, sweeping us along doe-eyed and swooning, with our hands clasped under our chins. I wanted to write realistically, taking what I most love about fantastical erotica and placing the scenarios into a believable setting.”

LN Bey, in Blue, presents characters each on their own quest for self-realization, usually through extremes of self-expression – through film, photography and performance, but also, as ‘artists’ of their identity, shaping themselves as living works of art (naturally, as works in continuous progress). The most obvious example of this is the character of Mai, who stands, in imitation of a statue, throughout the novel, decorating a niche of Carolyn’s home, but there are many others, less overt.

Janet engineers her entry into a fantasy, built upon expectations from her reading of sensational fiction (in this way, Blue is rather like a kinky, 21st century version of Jane Austen’s Northanger Abbey). Unsurprisingly, she is destined for disappointment, as reality fails to match her imagination (although there are elements of her experience that do appeal to her, and keep her coming back for more). Meanwhile, Janet’s fears must be overcome, in order for her to attain self-realization. LN tells us, “She isn’t looking for love but thrills, for her fantasies to come true, even if the book is largely about the impossibility of that. She knows how she wants to be treated now (‘strictly, but not callously’) and she’s suddenly got the opportunity she’s been looking for.”

Blue is about the artistry of pain, and control, and the struggle to fulfill yearning, to gain self-realization. Janet discovers, through her ‘quest’, that she craves being dominated, being compelled to serve and to take pain (despite disliking discomfort). She is a submissive, rather than a masochist, gaining pleasure from obedience rather than from the endorphin rush of pain itself.

In parallel, Carolyn, a dominant seemingly in control of everything around her, struggles to control her own emotions. LN tells us, “I modelled Carolyn’s crisis on the HAL 9000 character from Stanley Kubrick’s 2001: A Space Odyssey. An artificial intelligence-level computer, HAL was faced with two contradictory missions; unable to cope with conflicting impulses, as in Carolyn’s case, all hell broke loose.”

The most moving chapter in Blue is unveiled entirely through phone voice-mail, revealing Carolyn’s true feelings for her submissive.

LN comments, “I’m fond of alternative means of narration. That chapter shows us relics of communication, with a different timeline. We later learn that the voicemails weren’t even effective, because he wasn’t checking his messages. She was talking to no one.”

Some of the most vivid scenes in Blue evolve around hyper-stylized film-making, where

tension is heightened, since we, like Janet, have no idea what will happen next. Speaking of the inspiration behind these scenes, LN references director Kubrick’s ‘lingering’ shots and wide angles, and his tendency to shoot people as he would objects, examining them in minute detail.

As LN comments, “Blue is a book about erotica. About people who read erotica, and how we build expectations from reading it. One of the goals of the book is to subvert the expectations that the reader is likely to have about the story and characters, just as Janet’s expectations are constantly subverted.”

As her guests arrive for dinner, Janet is both fearful and aroused—because this is no

ordinary suburban dinner party. Recently divorced and looking for something new, Janet definitely finds it when her friend Jon invites her to join an exclusive club of kinksters whose initiation is to be the host—and the entertainment.

Before the food is even served, she’s naked and on her knees, not to mention in over her head.

LN has lived in various cities and towns throughout the American West and Midwest with spouse and pets in tow, pursuing various creative endeavours and playing interesting games.