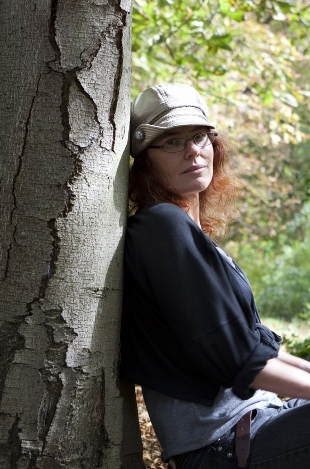 Of her decision to incorporate sexual elements into her stories, she declares, “Sex is massively important to us as human beings. It is motivation and identity. It can be beautiful or ugly, destructive or redemptive, cruel or loving. We need, as individuals, to weave sexuality into our lives, with respect and understanding of its power.”

Janine explains, “When I come to write a novel, I work it through in my head like a movie—starting with the visual scene, winding it back and forth, listening to the characters’ dialogue and working out their emotional arc from there.” 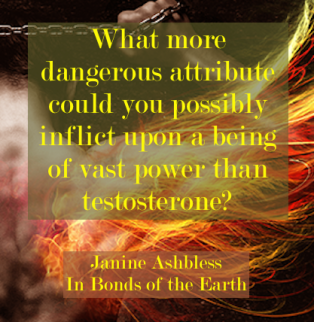 “It’s all in the visuals! Movies often provide ideas for details in my work – the way a god or monster looks, say, or the way one character kisses another – more than plot inspiration.”

Janine loves to watch fantasy and Sci-Fi films, naming Stardust as the inspiration for her steampunk tale And Their Flying Machines and Ridley Scott’s Aliens as the electricity which fired her Military Mind.

As a writer of fantasy erotica and steamy romantic supernatural adventure stories, Janine pinpoints several works as having directly influenced her writing. In particular, she names the Earthsea books, by Ursula K Le Guin, and C S Lewis’ Narnia Chronicles, alongside his Till We Have Faces, for inspirational world-building. She asserts, “You can draw a direct line between Le Guin’s Tombs of Atuan and my first novel, Divine Torment.”

Janine also names Angela Carter’s Bloody Chamber as an influence on her own short stories, for style and erotic/fairytale subject matter.

She is indebted to Alan Garner’s Weirdstone of Brisingamen and Elidor for evoking the British landscape in a manner ‘frighteningly magical’, which has inspired her writing on many levels.

Traditional folk music lyrics have informed the plots of several of her short stories,

as have Sondheim’s lyrics, which move and inspire her, being ‘clever and emotionally complex’. She enjoys musicals at the tragic end of the spectrum: Cabaret and Jesus Christ Superstar, and Sondheim’s Into the Woods.

Janine Ashbless’ latest release is the second in her Book of the Watchers trilogy: In Bonds of the Earth. Unafraid to tackle the more complex issues surrounding good and evil in mainstream religion, Janine has created a thought-provoking and immersive novel. The first in the series, Cover Him With Darkness, was released in 2014 by Cleis Press, to outstanding reviews.

When Milja Petak released the fallen angel Azazel from five thousand years of imprisonment, she did it out of love and pity. She found herself in a passionate sexual relationship beyond her imagining and control – the beloved plaything of a dark and furious demon who takes what he wants, when he wants, and submits to no restraint. But what she hasn’t bargained on is being drawn into his plan to free all his incarcerated brothers and wage a war against the Powers of Heaven.

As Azazel drags Milja across the globe in search of his fellow rebel angels, Milja fights to hold her own in a situation where every decision has dire consequences. Pursued by the loyal Archangels, she is forced to make alliances with those she cannot trust: the mysterious Roshana Veisi, who has designs of her own upon Azazel; and Egan Kansky, special forces agent of the Vatican – the man who once saved then betrayed her, who loves her, and who will do anything he can to 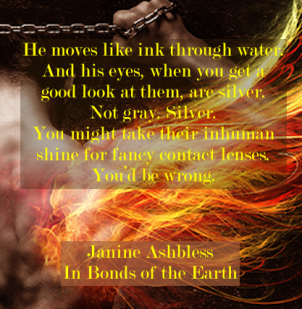 imprison Azazel for all eternity.

Torn every way by love, by conflicting loyalties and by her own passions, Milja finds that she too is changing – and that she must do things she could not previously have dreamt of in order to save those who matter to her.

Born in Wales, Janine now lives in the North of England with her husband and two rescued greyhounds. She’s worked as a cleaner, library assistant, computer programmer, local government tree officer, and – for five years of muddy feet and shouting – as a full-time costumed Viking. Janine loves goatee beards, ancient ruins, minotaurs, trees, mummies, having her cake and eating it, and holidaying in countries with really bad public sewerage.

Or locate her on Sinful Press

From the Apple store or Kobo