Donna tells us, “Ever since I can remember, I’ve loved the way a good story can transport me to another world, giving the magical sense of living another person’s life. I’d always been drawn to creating stories and characters of my own. I wrote a novella for my senior thesis in college, but then didn’t write creatively for another 14 years! In my mid-thirties, after a stint in academia and the birth of my first child, my urge to write creatively returned with a new intensity. I not only began to write with great passion, but began to read with a new eye and a new appreciation for the art and craft of storytelling.”

“Authors who impressed me at that time were women who had a confident and nuanced sensibility. Virginia Woolf’s To the Lighthouse amazed me for its keen insight into the magic of ordinary life and its effortless movement through the consciousness of  varied characters. Muriel Spark’s The Prime of Miss Jean Brodie and Mary McCarthy’s The Group inspired me with their sharp wit and clear vision of the female experience within a male-dominated society. Their sensibilities and voices drove me to do the same, to the best of my ability — to report on the truth of the female experience, seeing the humor and the beauty in our lives.”

“I found that my storytelling always turned to erotic themes, and felt ashamed to be writing “dirty stories.” Serendipitously, at that time I came upon a trio of inspiring books: The Mammoth Book of International Erotica, edited by Maxim Jakubowski; Best American Erotica 1997, edited by Susie Bright, and Diane di Prima’s Memoirs of a Beatnik. These books showed me that erotica can be intelligent, challenging and mind-expanding, exciting to the mind as well as to the libido. Di Prima’s contention that “there are as many kinds of kisses as there are people on the earth” and her brilliant description of several kissing styles still amazes and challenges me to capture the truth of the erotic experience in my own work. I must add, however, that it’s only the first two chapters of Memoirs of a Beatnik that I liked—the chapters about her affair with Ivan that had plenty of romance and emotion. After that, the book devolves into what it apparently was—stories written for the rent money for a pornographic press. The difference between the two sections was instructive to me. I adore sex stories with some sense of attraction beyond the physical, but am impatient with formulaic writing. Di Prima did actually have an affair with a man like Ivan. I’m not saying all writing is autobiographical in the strictest sense, but that section felt very real. That’s what I aspire to in my writing.”

“I think it’s a myth that writers are solitary geniuses who create their novels from nothing. For me, writing is more like a dialogue with authors who’ve come before, and those destined to come after. There are endless possibilities for the imagination, revealing the secrets of our inner lives. Storytelling is about connection, about expressing experience as freshly and vividly as I’m able, so that I can reach out to my readers, sharing what we rarely can in our ordinary lives. I feel connected to my favourite authors and often pick up their works to “prime the pump” when I’m writing. If I’m having trouble with my concluding sentence or first line, it helps me to read several first lines of good stories. I don’t copy, but I get in the mind-space of “good first line” and it really seems to help! Above all, the vision and humor of Mary McCarthy, Virginia Woolf, Diane di Prima and Muriel Spark encourage me to give the reader my best effort and not hold back. I feel I write better stories, especially erotic ones, when I remember this is not about me, this about us.” 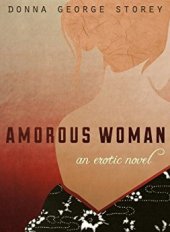 On the subject of film, Donna views it as the ‘premier storytelling form of our age’, alongside television. “When my not-so-mainstream novel Amorous Woman was published, a lot of people asked when the movie version was coming out. Not that they were totally serious, but a movie adaptation is the mark of an “important” work of fiction. I’m impressed by the collaborative nature of making a movie; it’s not just one person’s vision. A successful film requires so many different levels of artistry and co-operation. That helps me appreciate how a published work also involves various levels of dedication—editing, publishing, marketing, reaching the reader. Also, I’ve found “how to write screenplays” books more helpful for my fiction than how-to’s aimed at fiction writers. Robert McKee’s Story is an equally useful guide to writing a good novel. The focus on the structure of the story is particularly helpful, as I can sometimes get lost in the words when I’m writing.”

Speaking of the treatment of sex in film, Donna laments that the heterosexual male gaze tends to dominate. “Many ‘sexy’ movies don’t reach me emotionally. In considering the ones that have, my list includes In the Mood for Love (2000), Raise the Red Lantern (1991), The Lover (1992) and the conversation in the hotel lounge between George Clooney and Jennifer Lopez in Out of Sight (1998). I’ll add the “You know how to whistle, Steve, don’t you?” scene from To Have and Have Not (1944). What do they have in common? The exploration of the erotic through sizzling words and suggestive images, keeping the viewer suspended in a state of possibility. Actual sex scenes can destroy that magic because they reduce the act to two particular actors, whereas the moments before are tinder to the imagination. What happens off-screen occurs in our own minds and is more exciting than what we see.”

She adds, “My stories are explicit, but these films helped me realize that the sexiest scenes involve the building of tension and desire. It might not be a coincidence that the majority of the films I’ve listed are made in Asia and/or have an Asian theme. Nuance and suggestion tend to be more appreciated in Asia. Out of Sight is pure Hollywood, but they got it right at least in that one scene!”

Donna is currently researching a historical novel set in New York City, in the 1910s. “To my surprise, I’m finding the most exciting source material to be paintings from that time, in particular the Ashcan School artists, and the work of John Sloan. Photography captures things ‘as they are’ (although we know photography is an art… just look at Alfred Stieglitz) while a more impressionistic mode of painting was well established by the early twentieth century. While we might think that photographs would be a better source, to gain a sense of life at the time, I’ve found most to be stiff and posed, due to technological limitations. They’re great for buildings and costume, but a little bit low on life energy. The Ashcan School artists, however, were trying to capture the vitality of the city on their canvases; I think they succeed where photographs of the time didn’t. Photographs express the sensibility of photography, but for this project, I’m really impressed by the way John Sloan can evoke a mood, an entire personality, and a time period in a few lines or strokes of paint.”

Donna notes that Turning Out the Light fascinates her in representing exactly what she wishes to do in her own writing: ‘peek into the bedroom window of the early twentieth century’. “I love how the woman is so voluptuous and eager to proceed with the evening’s activities. I love the subtle way that the man’s anticipation is shown, in his confident posture, and in the look the two lovers exchange. It’s smouldering. That one image inspires me when I need a little juice to keep going with a long and complicated story!”

“I acted as I much as I could in high school and in college, becoming someone else for a while. I’m sure that spirit lingers in my creative life.”