I read Leone Ross’ Drag a few years ago, and I knew right then that I’d found someone special, an author with a unique voice. For me, the story is about our desire not to be restricted or categorized. It’s a battle-cry for individuality, for throwing off shackles.

The whole collection, of Come Let Us Sing Anyway, has this feel for me, that we’re seeing characters who are defiantly blazing, refusing to be constrained by others’ expectations.

Leone’s cast is diverse, eccentric, eye-poppingly theatrical. And yet their actions and words are strikingly familiar. Bizarre as they are, they show us the universal truths that bind us: that we all love, and grieve, and hope, and yearn; that we all struggle, and desire.

Few writers can deliver dialogue like Leone Ross – or achieve so much with so few words. Her stories sing in the small details, her characters built in the roll of their hips and the blossom of obscenities from their mouths, often delivered in Jamaican patwa.

Her prose is dazzlingly beautiful and daringly original (as a woman masturbates in a restaurant WC, ‘…even the shining tiles on the bathroom floor seemed to ululate to help her’).

As readers, we each bring our own interpretation; it’s what makes reading exciting. Come Let Us Sing Anyway is, in many places, bravely, invitingly ambiguous. It’s a wonderful thing, because it obliges us to bring ourselves to the story, to find meaning in relation to our own experience.

You may like to read my interview with Leone, here, on her influences and intentions in storytelling.

or, if you’d like a copy for your Kindle, purchase from Amazon 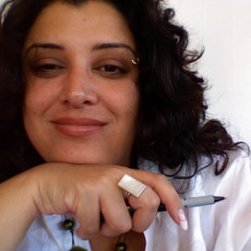 Leone’s first novel, All The Blood Is Red, was short-listed for the Orange Prize, in 1997. Her second, Orange Laughter, received critical acclaim in 2000, published in the UK, US and France.

Leone worked as a journalist and editor for fourteen years, holding the post of Arts Editor at The Voice newspaper, Women’s Editor at the New Nation newspaper, and  transitional Editor for Pride magazine, in the UK. She also held the position of Deputy Editor at Sibyl, a feminist magazine. Leone freelanced for The Independent on Sunday and The Guardian as well as London Weekend Television and the BBC.  She currently works as a senior lecturer in Creative Writing, at London’s Roehampton University.