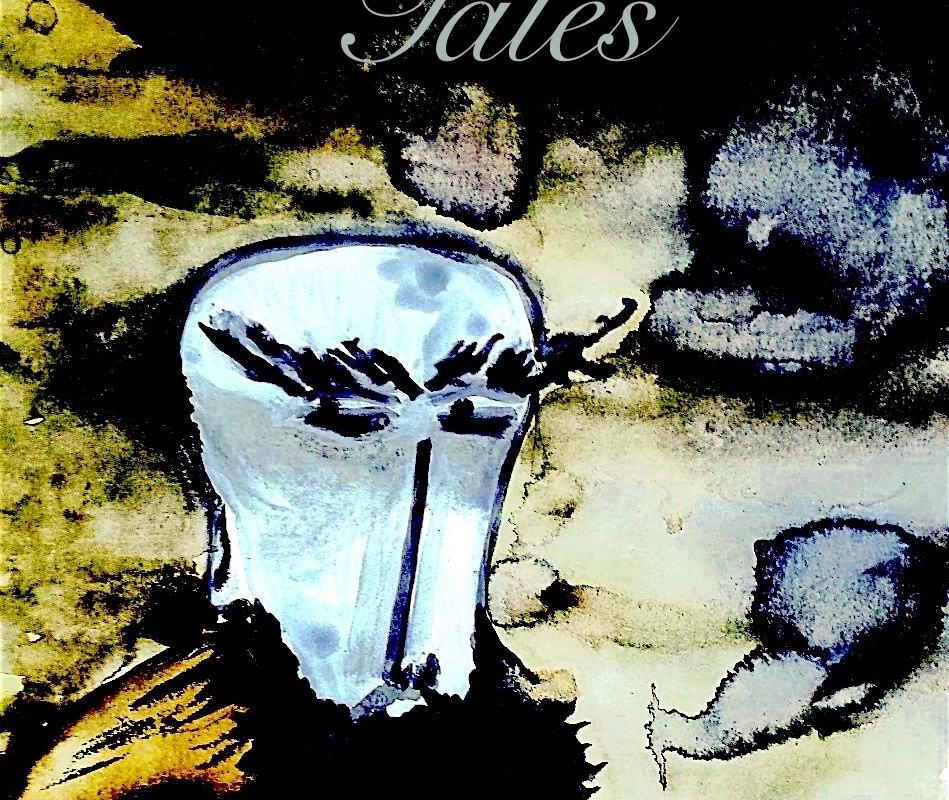 From Cautionary Tales, this story is inspired by the folk customs and superstitions of Russia and Eastern Europe.

The Likho is an evil one-eyed fiend from the forest, known for its fondness for human flesh.

A moment’s temptation takes us on a wrong path. On that path may lurk foul fiends.

A dairy farmer was once married to a woman so cantankerous and contrary that there was no living with her. If he asked her to get up early and help him milk the cows, she’d lie in bed until noon. If he requested pancakes, she’d be sure to cook beetroot soup. If he dared suggest that she muck out the cowshed, he’d find a pile of dung in his boots.

In addition, she found constant fault with his appearance and behaviour: his breath reeked of garlic and his armpits of onions; his back was an eruption of boils; he always had grease in his beard and cabbage between his teeth; and he slurped food like an animal. One night, she went too far, scoffing that he was useless between the sheets, since no children had ever been conceived there. She complained that she’d rather share her bed with a pig.

Driven beyond all patience, he took a pillow and held it over her head until her arms flailed no more. It took but a minute and, immediately, a blissful hush settled on the house. He wondered why he’d never thought of it before.

Of course, when evil thoughts and deeds are abroad, they attract certain creatures and crawlers, as we restless spirits know all too well. Man’s wicked folly draws them close.

A malevolent forest demon, the Likho, sniffed the scent of violence and came creeping from its winter lair, bare feet stepping steadily through the snow. Dark lips contorted in a grin of anticipation, revealing yellow teeth and blackened tongue.

The fiend headed into the village and, as was its wont, paused to check upon the hens. It stroked those sitting on an uneven number of eggs, its filthy talons tickling where it might have rent asunder. Claws trailing over fences and gates, it made its inevitable path, drawn towards the stench of ill deeds.

Finally, the beast arrived at the house of the dairyman. It peeked through the shutters with its one eye and there, by the morning light, watched as the husband laid out his wife on the table, so that her feet faced the door, as was the custom.

The dairyman tucked her nightgown round her toes and opened the window a little, despite the nip of frosty air.

‘Off you go,’ he declared, ‘Fly away elsewhere.’

On the beams above the warm stove, the ghost of the murdered woman sat grumpily, 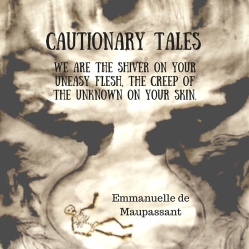 glaring down at her husband, quite as she had done in life.

So it is that we, the unhappily departed, are often obliged to haunt the places of our damnable demise. Little does man know of this shadowed realm, between light and dark, and the torments that bind us so closely to the world where once we drew breath.

Having dispatched his wife, the dairyman’s thoughts turned to the shapely widow next door. With a spring in his step, he donned his best shirt and hat, and sauntered round to see her, intending that they be married as soon as the burial rites were completed.

The widow was flattered by the alacrity of his proposal, considering that breath had barely left the wife’s body, and accepted gladly. So eager was the hussy to take the woman’s place that she suggested moving in straight away – on the pretext of cleaning and cooking for him in his time of distress.

The Likho had waited until the man walked down the path and had slithered in through the open window, surveying the fresh corpse and the ghost, still hunched above and scowling.

‘Ha!’ cackled the fiend, ‘I expect you’d like revenge on that husband of yours. Murder shouldn’t go unpunished, and no creature enjoys delivering chastisement as much as I. What about giving him a taste of his own medicine? If you’d be so kind as to lend me your body, I’ll set him dancing to my tune.’

The wife’s spectre grimaced and nodded, at which the wicked Likho stripped off the nightgown, then the dead woman’s pliant skin, peeling back the flaccid folds. These it left in a slack heap.

It gobbled her flesh and sucked the bones clean. These it hid behind the stove, before inserting itself inside the empty, wrinkled carcass, taking the former position of the corpse. Its fat tongue swiped the last juices from around its lips.

When the husband returned home, all was as it had been; there was not a speck of blood to be seen, although the strangest smell of rotten eggs lingered.

The neighbours came to pay their respects and offer condolences, and the comely widow served pancakes and pirozhki dumplings to the mourners. A few eyes rolled; it required no fortune telling to see which way the wind was blowing. However, life goes on, and the villagers agreed that the new couple were a good match. His first wife had been a harridan, with few good words for anyone; none would miss her.

Once the guests had left, it wasn’t long before the man and the floozy tumbled into bed, tittering and fondling. So intent were they that neither noticed the corpse sitting up to watch them.

After some minutes, the Likho called out, ‘That hardly seems polite. I’ve only been dead a few hours.’

ceiling. Both assumed that the corpse had returned to life to berate them.

Kneeling on the floor, the man pleaded with his departed wife for forgiveness. At this, the widow raised an eyebrow. She’d been ignorant of bedding a murderer, although the news was no real surprise.

The Likho raised the corpse’s mouth in a leer, replying, ‘Not to worry. I’ll join you. I’m sure there’s room for three. My feet are cold, so I’d appreciate you warming them for me.’

With that, the devilish creature hopped into bed and patted the covers, indicating that the husband should clamber in. The fiend lay between the two, a cold hand placed on the thigh of each. It then went to sleep, snoring loudly through the night, while the pair lay awake, too horrified to move or speak. The strumpet could hardly deny that she’d climbed into her neighbour’s bed more quickly than etiquette allowed, and now she was facing the consequences.

In the morning, the corpse sat at the table and declared to the widow, ‘I’m feeling quite peckish. I suppose you can cook? A plate of draniki if you please and look sharp about it.’

Too terrified to argue, the woman began her task. Each draniki she set down was gobbled in a single gulp, replaced by the demand for more. The Likho rapped the husband’s knuckles when he tried to take one, telling him to wait until it’d had its fill. Eventually, every potato in the house had been eaten.

‘I’m still rather hungry,’ admitted the corpse. ‘Why don’t you go and shoot some rabbits? We might have a stew.’ It inclined its head towards the door, to indicate that the husband had better get a move on.

As soon as he had departed, the Likho sat back in the chair contentedly. ‘I suggest that you milk the cows while he’s gone and then clean the house,’ the corpse commanded.

All day, the widow tended to the animals, scrubbed and polished, until she was ready to swoon. As soon as the Likho saw this, it clapped its hands in glee and split the woman neatly in two with a flick of its talons.

Such are the rewards of those who crave illicit pleasure and who care not how their comforts are attained. A moment’s temptation takes us on a wrong path, on which may lurk foul fiends.

As before, it feasted on the tender flesh and licked the bones clean. The skin it put to one side and, casting off the wrinkled wrapper of the murdered wife, slipped inside the new.

The demon tossed the bedraggled old remnants behind the stove, with all the bones, and gave itself a shake, adjusting to its new costume.

It winked at the wife’s ghost, still perched overhead.

‘Don’t worry. I’ve not forgotten him!’ the fiend assured her.

It preferred the shape of this skin, which was smoother and altogether more plump and comfortable. More fun was to be had before it had finished.

When the man returned (without any rabbits, since all had eluded his gun and traps) he was delighted to see that the animated corpse of his old wife had departed and that his new ladylove appeared in good spirits.

‘My darling, I persuaded her to leave,’ cooed the demon. ‘Now, come and give me a kiss.’

The Likho locked him in a firm embrace and wrestled him onto the bed.

‘Goodness me,’ exclaimed the dairyman. ‘Gentle my love. You’re like a bear tonight. You’ll crush the breath out of me.’

The beast gave a girlish giggle. ‘If I’m a bear then you must be my honey,’ it simpered.

It then squeezed the man so tightly that he fell into a faint. In a trice, he was rent down the middle, becoming a tasty supper for the evil creature. Once the flesh had been gobbled, the Likho stuffed the skin and bones behind the stove and retired to bed.

At dawn, the demon sprang awake, ready to see what the day might bring. By the door, it noticed a basket of mushrooms, brought from the forest by the dairyman the day before. With a flip of the pan, the fiend fried up the delicacies, serving them with a dollop of sour cream and swallowing them utterly in three great gulps.

So self-satisfied was the beast that it hadn’t noticed the basket brimming only with poisonous varieties: chosen by the dairyman in hope of finally sending his corpse wife into the hereafter.

The creature clutched its stomach, torn by a churning ache. Such was its torment that the Likho flung off the widow’s skin and bolted out of the door, back to the forest.

It left behind an empty house, but for the graveyard behind the stove and the shrivelled casing of the floozy, cast onto the floor.

As for the wife’s disgruntled spirit, it had found the past days’ events more than agreeable

Visit my Amazon page for more.