“We are the voices in the shadows …”

Inspired by Eastern European and Russian superstitions and folklore, here are twelve tales; darkly delicious imaginings for the adult connoisseur of bedtime stories.

Listen,
Listen with your eyes,
and your lips.

Be drawn into a world where the boundaries between the everyday and the unearthly are snakeskin-thin, where the trees have eyes and the night has talons, where demons, drawn by the perfume of human vice and wickedness, lurk with intents malicious and capricious.

Listen with your skin and your blood.

Tread carefully, for here the dark things best left behind in the forest may seep under your door and sup with you; the lover at your window or in your bed may have the scent of your death already on their breath.

We are the shiver on your uneasy flesh,
The creep of the unknown on your skin.

Whispered to you from the edges, from the haunted mouths of those who see more than you or I, here are twelve tales of lust and rivalry, of envy and deceit, and of secrets gouged from of the darkest depths of the human heart.

Is your shadow on the wall,
really yours, after all?

We see what you cannot. We are not alone, and nor are you. 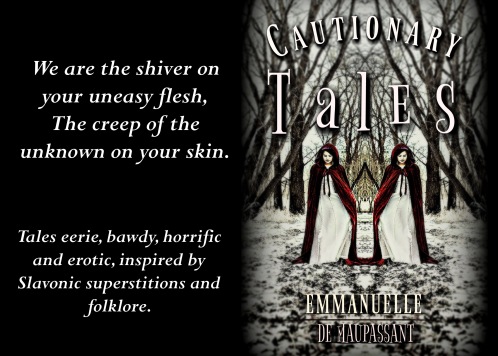 ‘Funny, brutal, and irreverent, these stories look at the human propensity for vice and lust and punish its characters for those sins in dark and cheeky ways.’   – Bustle.com

‘Deliciously dark and misanthropic. Five thumbs up to Emmanuelle and her incredibly original and creepy collection’   – Janine Ashbless

‘Your stories are still running through my mind. It’s as if you’ve created a living thing with a heartbeat. Quite extraordinary.’
– Helen Bach

‘This extraordinary collection is, at once, a celebration of the simple beauty of language, a colorful and sometimes terrifying glimpse into the grimly fatalistic heart of Slavic folk culture, and a highly satisfying work of sensually charged entertainment. These twelve stories range in mood and atmosphere from the mysterious and macabre—reminiscent of Angela Carter’s treatments of traditional folk and fairy tales—to the broadly humorous, bawdy romps in the spirit of Boccacio, populated with loutish peasants, dirty old men, promiscuous milkmaids, and horny demons in varying degrees of malevolence, ghouls, ghosts, vampires, elemental sprites, and throngs of things that go bump in the magical night.’      – Big Brain Erotica

‘Each tale is  beautifully crafted, evocatively constructed and sensually delivered. Her work is the richest of tiramisu, to be savoured.’ – Eros Publishing

‘Emmanuelle de Maupassant strikes the pitch perfect balance between rapacious sexuality and moral justice by using one to feed the other. She has done something unique with Cautionary Tales. She’s taken a literary tradition and transcribed it for the sexual landscape of the present day. No one does this as well as she does, and I look forward to reading much more of her work.’
– Malin James

‘Every once in a while, I stumble across a writer who seems to come from another time,  when strong, intelligent women with darkly-woven souls wrote thought-provoking, deep, and literary works of fiction. Women like Sylvia Plath, Anais Nin, and Mary Shelley. Women who often wrote in secrecy, being feared for their original voices… the kind of voice you cannot help but notice, penning prose that makes you shiver and inspires you.’   – Zander Vyne

‘Cautionary Tales is a beautifully ambitious undertaking, and Emmanuelle de Maupassant’s entire concept and execution are a refreshing surprise. A collection that only comes along once in a very great while.’ – Frank Lee 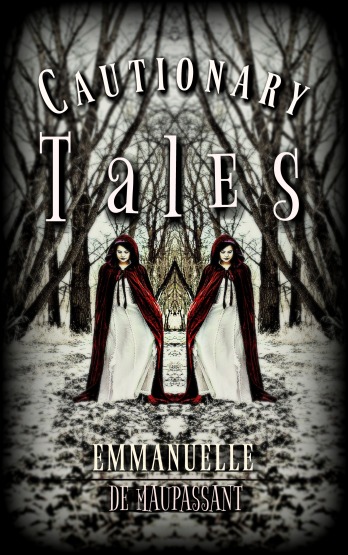